Cape Vincent, New York - A rare Great Lakes Sloop dating from the mid-nineteenth century has been discovered near the north east end of Lake Ontario in the upper St. Lawrence River. Video images of the wreck review by underwater archeologists, showed a unique centerboard and rudder design not seen before on a Great Lakes shipwreck. The discovery was made late this summer by Dennis McCarthy and Skip Couch, scuba diver enthusiasts and authors of several divers’ guides and shipwreck books. 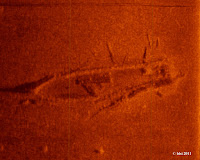 The team was on a trip to side scan and record images of known shipwreck sites. While in transit the new wreck was discovered. The location did not match other known wreck sites. New York State Historic Preservation Office in Albany was notified of its discovery and location. The side scan sonar image showed a wreck that was about 50 feet long and 14 feet wide. Inside the hull was a solid object near the starboard stern. Visible was a large rectangular object behind a single mast step. All indications were that the wreck was a sloop. 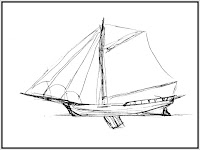 History of American Sailing Ships" by Howard Chapelle traces the origins of American Sloops from the “Bermuda Sloop”, a distinctive design of the colonial period, to the “Hudson River Sloops” of the 1850’s. Although large numbers of sloops sailed on the Great Lakes not much is known about their designs. The Great Lakes Sloops rigged with a fore-and-aft sail and single mast were small and usually less than sixty feet in length. In the first half of the nineteenth century much of the commerce on the lakes was from ports in small rivers, bays, or harbors where the water was shallow. Sloops were well suited for these locations taking advantage of their great maneuverability and small size. By mid century, due to the enlargements of ports and canals, two and three masted schooners became the predominant vessels for commerce due to their larger cargo capacities. Small steam ships replaced the commercial sloop before the end of the century.

In late September a dive team of Dennis McCarthy and Michael Hughes, directors of the St. Lawrence River Historical Foundation Inc. were able to video tape the site. What they found were the remains of a very finely built hull of a sailing vessel. Not intact but lying exposed as if its parts had been laid out visible for all to see. The square object spotted on the side scan was a cast iron stove. Lying on its side inside the wreck, the entire centerboard and trunk appeared to have been pulled out of its original position. A centerboard was a small keel that was lowered and raised as needed through the bottom of the vessel. The trunk, that it was housed in, was designed to prevent water from leaking into the hull. The rudder, with its unique triangular shape, was off to the side of the stern. The dead wood of the keel was visible as well as many upward curving deck and hull planks. Missing were the mast and rigging. In the area surrounding the wreck were pieces of railing and structure. Given the presence of an iron stove and all the pieces of wood around the wreck, it appears that the ship sunk very fast. It may have had its mast pulled out after sinking thus causing the damage that spread open the hull. 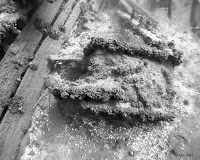 The dominate feature on the side scan turned out to be the Box Stove resting inside the hull. These cast iron wood stoves were common during the early to mid 1800s, they were valuable and not usually thrown away. Its presence helps to suggest that the ship's sinking was sudden and accidental. The stove, although it may not be useful in identifying the construction or sinking date of the wreck, was used to provide a temporary name. Until its real name is discovered through research, the team and New York State Historic Preservation decided to name it the Box Stove Wreck.

As well as the name, the origin of the wreck is not known. It could be from the period when ships on the Great Lakes were initially limited by the dimensions of the locks on the Welland Ship Canal to less than 16 feet in width. Some of the visible characteristics of the wreck are similar to Hudson River Sloops of the 1840s and 1850s. Historical research has identified at least one locally built sloop sunk in the1880s near the same area. The Box Stove Wreck may help fill in the story of the Great Lakes Sloops since little information is available on that type of sailing craft.

The shipwreck information has been provided to the St. Lawrence River Historical Foundation Inc. which registered the Box Stove Wreck as an underwater archeological site with New York State Department of Historic Preservation. Historic shipwrecks abandoned and embedded in New York State underwater lands belong to the People of the State of New York and are protected by state and federal law from unauthorized disturbance.