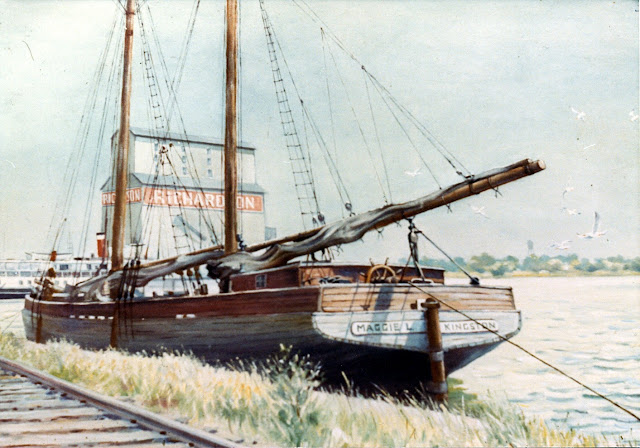 Maggie L by SRHF on Sketchfab

The Maggie L. rests across the channel from just off of the of , .   Its bow was cut off during the collision with the steamer Keystate. It is in about 60 to 70 feet of water.  The hull is in reasonable shape with its decking and holds still visible. The top of the deck is pulled to the side of the hull. This either happened at the time of the collision or afterwards when it may have been hooked by a ship’s anchor.  The masts were cut off to about 3 feet above the deck. The ship’s rudder is still intact but the ship’s wheel was removed by scuba divers in the 1970s.

Wreck is of the 90-foot wooden schooner the Maggie L. It was one of the last commercial sailing vessels on the Great Lakes and . She sunk when her bow was severed by the steel freighter Keystate on November 4th, 1927.  Captain M. H. Mellow, of was leaving the main shipping lane for the Clayton docks.  The Keystate, a 260-ton freighter was owned by the Keystone Lines of Canada and piloted by Captain E. J. Smith, of .  There were no fatalities and the crew reached shore using the life boat which was being towed by the Maggie L. She sunk within minutes of it being struck. The Maggie L. was wrecked only 45 years when it was found in the early 1970’s.  Sport scuba diving at the time, like the hard hat diving before it, was primarily involved in salvaging.  Before the arrival of the zebra mussel, underwater photography was almost impossible.  Like many wrecks from that time, many of its artifacts were salvaged. Times have changed and sport diving organizations are now leading the efforts to preserve these wrecks and train divers in low-impact diving.

90-Foot Sailing Vessel Goes to Bottom of River at Clayton

The Maggie L. a 90-foot sailing vessel owned and piloted by Captain M. H. Mellow, of Bath, Ont., sunk in about 60 feet of water a short distance off the Clayton dock after it had collided with the Keystate, a 260-ton freighter, owned by the Keystone Lines of Canada and piloted by Captain E. J. Smith, of Kingston, Ont., in the St. Lawrence river Friday evening about 7. Although no one was injured, the lives of three men were endangered. The men were: Captain Mellow, R. Laird and M. H. Young, , Ont. They rushed to the life boat which was being towed by the Maggie L., and easily reached shore. Within five minutes after they left, the Maggie L. sank from sight.

Down image of the Maggie L. where the separation of the deck from the hull is visible.  Impact from the collision with the Keystate cut through the hull at the bow and displaced the deck structure to the port side.

Things to see on the wreck:

Built in in 1923, the Keystate is owned and operated by La Verendrye Line, Ltd. of . She is a typical Canadian canaler, 250 feet long and 42 feet beam.