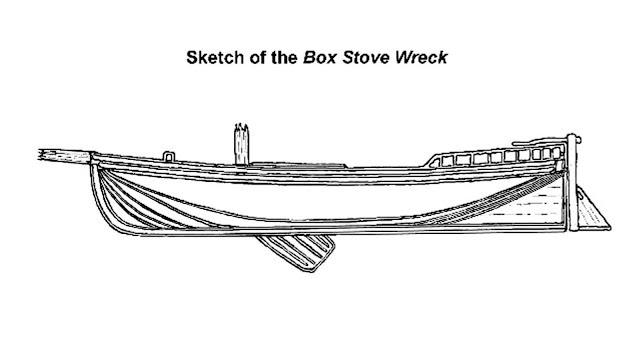 Box Stove 2011 by SRHF on Sketchfab

The Box Stove wreck was found in 2011 by Dennis McCarthy and . Its name and origin are unknown as of the publishing of this book. The wreck is a sloop that appears to have been de-masted after it was sunk. Information indicates that it was build some time after 1850 and before the 1880s.

The major feature of the wreck is an iron box stove and the nearly intact drop centerboard still in its box. The site is listed with New York State Historic Preservation as an archeological site.

“The History of American Sailing Ships” by Howard Chapelle traces the origins of American Sloops from the ‘Bermuda Sloop’, a distinctive design of the colonial period, to the ‘Hudson River Sloops’ of the 1850’s. Although large numbers of sloops sailed on the not much is known about their designs. The Great Lakes Sloops were rigged with a fore-and-aft sail and their single mast were small and usually less than sixty feet in length. In the first half of the nineteenth century much of the commerce on the lakes was from ports in small rivers, bays, or harbors where the water was shallow. Sloops were well suited for these locations taking advantage of their great maneuverability and small size. By mid-century, due to the enlargements of ports and canals, two and three masted schooners became the predominant vessels for commerce due to their larger cargo capacities. Small steam ships replaced the commercial sloop before the end of the century