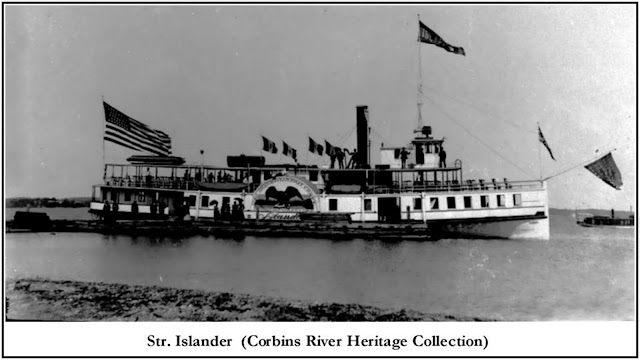 Islander by SRHF on Sketchfab

The site is the wreck of the Islander, a side-wheel steamer that burned and sank on September 16th, 1909. The wreck is just offshore at the foot of in downtown The wooden wreck is much deteriorated. Resting on the slop of the bottom, it is close to being parallel with shore.  The wreck is from 30 to 45 feet deep, with some timbers as deep as 60 feet.  This is a maintained dive site with signage by Seaway Trails and car parking and water access are available. It is a nice shore dive up stream off the hospital along or downstream the side of Cornwall Brothers Store and Museum.

This side-wheel steamer was built at in 1871 and launched as the James H. Kelly and later renamed the John Thorn. The Islander measured 125 feet by 20 feet by 7 feet and weighed 118 gross tons. As well as being a regular mail carrier between Clayton and , she was used in island and river tours. The Islander burnt on September 16th, 1909 while at dock in .

The wrecking crew, with derrick and tug, have arrived at this place and are engaged in raising the wreck of the steamer Islander, which burned and sank at Cornwall’s dock. Their work yesterday resulted in the hoisting of the steamer's anchors. Efforts will be directed today toward raising the boiler which is of considerable value, being comparatively new

The hull of the steamer Islander, which was burned at 's dock, , last fall, was towed out into the channel by the steam-barge Hinckley. The work was under the supervision of Supervising Engineer Churchill, of the district. There is twenty-four feet of water now over the poor old hull.

The Islander, which was burned at her dock at several weeks ago, is still lying in front of the dock, completely under water. The engine, dynamo and shafting have been removed from the hulk, but the main part has resisted all efforts on the part of the wrecking crew. A light warns approaching vessels of the danger. All boats are now obliged to land at the Crossman dock.