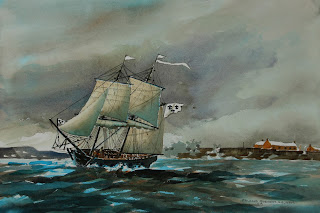 In  the  mid 1970's,  the  New  York  State  Diver's  Association  worked  under  a  New  York  State  permit  to  excavate  a  ship  wreck  in  North  Bay  Carleton  Island  in  the  St.  Lawrence  River  near  Cape  Vincent,  NY.  Carleton Island was a shipyard and shipment terminal occupied only during the American Revolutionary War. It was the supply post on the North East end of Lake Ontario where goods were transferred from small river bateaux onto lake sailing vessels. Two volunteer  Divers/researchers  on  the  project,  Dennis  McCarthy  and Michael  Hughes of  Syracuse,  became  interested  in  trying to identify the wreck in North Bay by the process of eliminating vessels that would have existed at the time Carleton Island was operational. Available to the researchers was a list of vessels that the British held on Lake Ontario from 1760 to 1778.

In  1972,  a scuba  diver  from  Syracuse  recovered a  wood  stocked  anchor from  Niagara  Shoal.  The  anchor  had  a  large  ring,  which  is  typical  of  older  anchors  that  used  hemp  rope  rather  than anchor  chains, which the  more  modern  smaller  rings  are  designed  to be used  with.  From  photos  that  were  sent  to  the  Smithsonian,  the  anchor  was  identified  as  being  from  the  18th  century. The anchor was viewed by SRHF members in 1994 at the New York State preservation center at Pebble Island.

In  1993,  interest  in  this  vessel  rekindled  when  Peter  Engelbert,  Staff  Archaeologist  from  the  Ontario  Ministry  of  Culture  and  Tourism,  visited  the  site.  Dennis  McCarthy  and  Michael  Hughes  returned  to  Niagara  Shoal  for  the  first  time  in  over  ten  years.  It  was  evident  that  the  vessel  had  deteriorated  greatly.  It  was  completely  covered  in  zebra  mussels,  adding  significant  weight  to  the  extremely  fragile  structure.  With  the  renewed  interest  in  the  shipwreck  and  concern  for  its  deterioration, the St. Lawrence River Historical Foundation Inc. (SRHF) was  formed   as  a  non-profit  corporation  in   July  of  1994.  SRHF’s charter is  to  promote  research  and  education  regarding the  maritime  history  of  the  St.  Lawrence  River.  The  IROQUOISE  PROJECT  of  SRHF  is  designed  to  document  through  non contact  methods  the  wreck  on  Niagara  Shoal  and  to preserve  this  information  for future  generations,  regardless  of  what  happens  to  the  vessel  itself.

What is SRHF ?   SRHF is the abbreviation for St. Lawrence River Historical Foundation, Inc. SRHF was formed as a non-profit corpor...